Antartica… probably the most inaccessible continent of them all… the continent that most people did not get to go to. And after travelling 32 hours by bus to the Southern-most tip of South America, where we got to the closest point to the South Pole (the supposed Gateway to Antartica), we did not make it either.

Apparently, we were too early for the season for Antarctic expeditions. 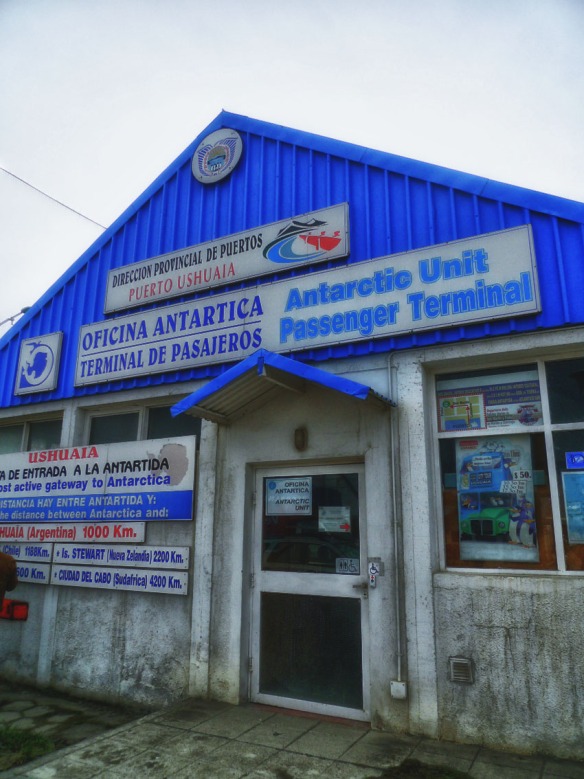 Closed for the season

Granted, Ushuaia is a damn magnificent destination – there are National Parks to explore, treks to hike, and glaciers to bloody your nose on. But it is still a bit of a bummer to travel so far to miss out on the bragging rights of having visited one more continent.

To me, this is glorious… couldn’t get sick of this view

(Probably) Because of complainers like us, the city of Ushuaia seemed to have gone out of their way to say that “this is good enough, you’ve reached the End of the Earth, being able to go to Antartica had always been a bonus”

There were endless signs everywhere saying that we were indeed at Fin del Mundo. 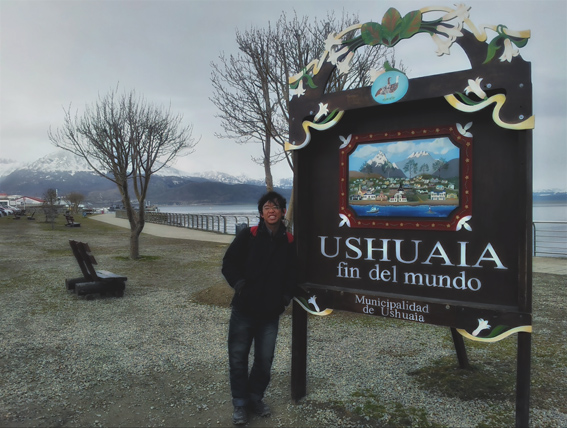 If that was not enough, they have specialized Fin del Mundo stamps for your passport if you visit the Tourist Office. 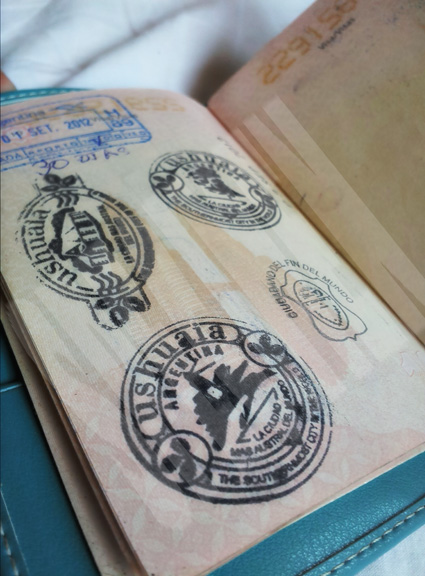 Our (by now) rather grimy passport

And even a certificate to prove for the last time already that YES! THESE PEOPLE HAVE GONE TO THE END OF THE WORLD! Just give them their bragging rights and stop asking about Antartica already! 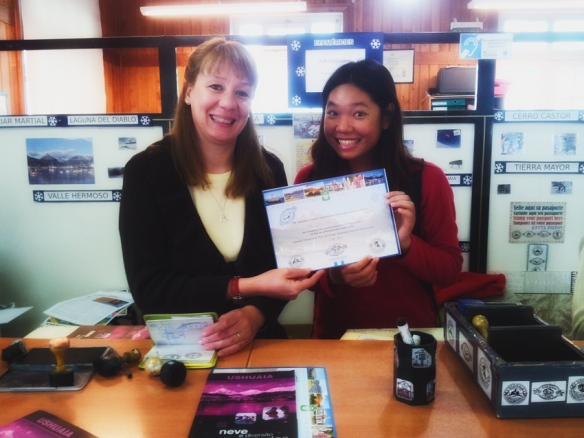 Yes… they give out the certificates in a presentation “ceremony” style, complete with handshakes and a photographer (me)

Seriously speaking, the Tourism Office at Ushuaia is an EXCELLENT resource to plan your travelling needs around the area. They have up-to-date tours/weather information, and of course, passport stamps and certificates.

The Tourism Office is located at the intersection of Juana Fadul y en el Puerto, and (yet another) Avenidad San Martin.

If you had mentioned Ushuaia to me before this trip, the mental image I’d have of the southern-most city in the world would be a snowed-out and deserted one-salon town; our accommodation would be a log cabin that was miles away from everywhere else – kinda like Walter White’s hideaway cabin in the last few episodes of Breaking Bad, and we would have polar bears and penguins roaming right outside. (yeah yeah… I know… Polar Bears live in the North Pole… Nerd…)

This belief that we were heading to the ends of the earth was further reinforced by our monstrous bus-bus-boat-bus transfer to get here. 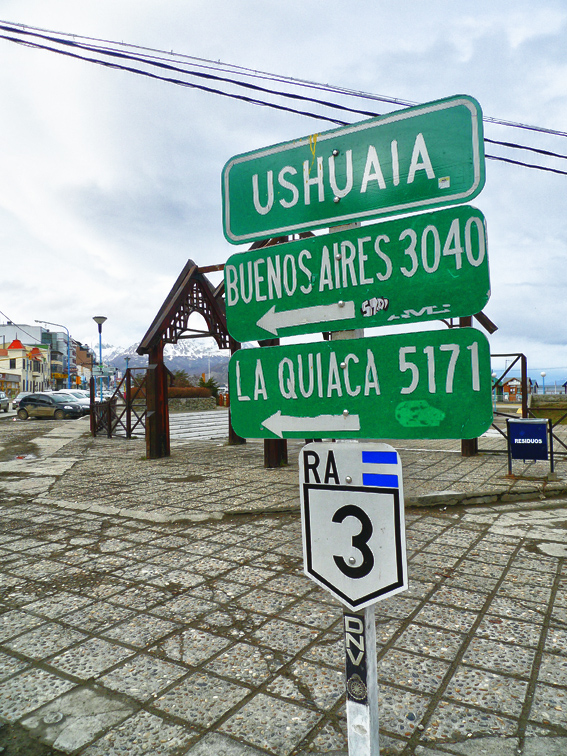 We are definitely far from everywhere else…

So you can imagine my surprise when the first thing I saw upon pulling into town was a HUGEASS casino… followed by whole shopping streets with bright lights, bustling restaurants and… a Carrefour (??)

Ushuaia is definitely not the one-horse town I was expecting.

I guess as Ushuaia slowly gained the reputation of being the “Gateway to Antartica”, more and more tourists have started to “discover” it. 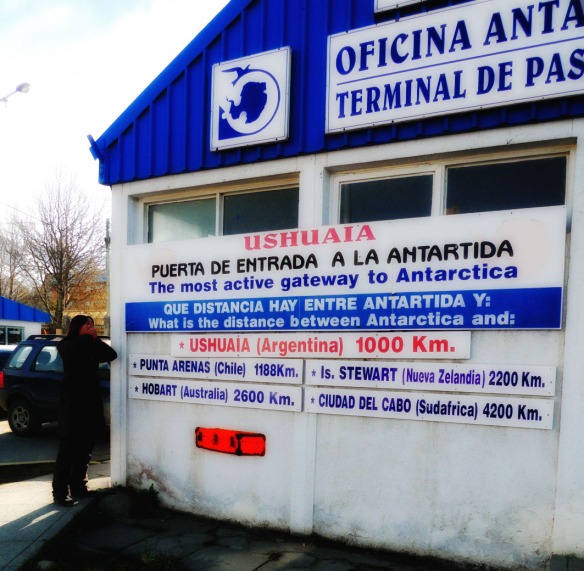 Gateway to Antartica… ONLY 1000km away!

Of course, on one end of the spectrum, you still have us – the “explorer-wannabes” who will be shocked by how… “developed” the city is.

We were the ones who showed up in our flip flops after traveling in shaky buses for 32 hours.  Along with us (I mean that quite literally… these guys took the same bus as us into town), we had a cool Spaniard who was on a year-long trip, but somehow managed to get by carrying a backpack that was half the size of ours. We also had a Brazilian who stepped into town in the middle of the night and proceeded to ask around for the nearest campsite.

The ambient temperature then was just near freezing.

We felt we gained that little bit of street cred just by hanging around them.

We must have been quite a sight as we dragged our scruffy selves across town, looking for a place to stay.

It certainly didn’t help that we were surrounded by the pre-Antartica-trippers who were wearing their warm, furry designer winter gear. THESE travellers were hanging out in the upmarket micro-breweries and restaurants, drowning themselves in beer and devouring chunks of bloody steaks, giant Alaskan King crabs and entire roast lambs.

However, regardless of the mode (or price) of travel, there was an undeniable sense of adventure in the air.

I think it must have been the amount of posters in the store windows, advertising the activities that could be done around town. Of course, there was the headliner – the cruises to Antartica, but there were also other activities such as going on husky-sled rides to the country side, treks up to glaciers, penguin-watching tours on fishing boats, snowboarding expeditions down deserted mountainsides, visits to National Parks, and… 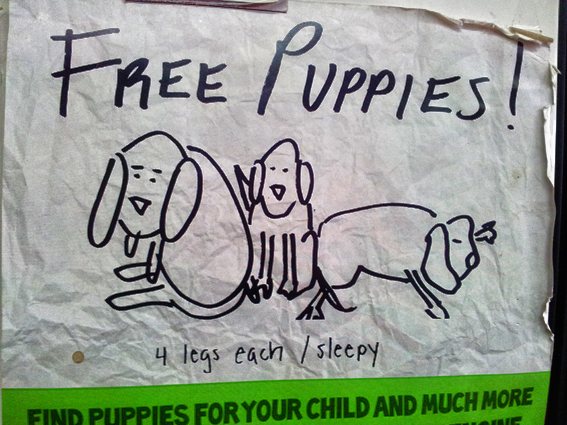 and puppies for adoption!

The crisp Antartic air, the busy sea channel and the towering mountains around us made the possibilities seemed endless!

View of the Beagle Channel from our hostel room

Who are TW and Jo?

Where we’ve been, What we’ve said